by published: 4 years ago 563 views
0FacebookTwitterPinterestLinkedinEmail

The relation between beer and the British Royal Navy was replaced with a new one. The rum which, replaced beer, stopped being granted to sailors after the Great Rum Date, on July 31, 1970! The date is remembered as Black Tot Day!

Black Tot Day is the name given to the day when the British royal navy distributed for the last time to its sailors the daily amount of rum (rum ration/daily tot) deserved.

This practice was implemented to strengthen the moral of the crew during the distant sea trips. At the beginning were given beer and not rum. However, when the British trade expanded in all parts of the world, the need to find a drink which, will last longer and occupies less space was created. The rum started to be distributed to the sailors in March of 1667. They used to store it in a particular oak barrel, known as the “Rum Tub”, which was decorated and had a sign “The Queen, God Bless Her”. Therefore, the introduction of that “Rum portion” was seen as a generous move to the sails, but also a move that created bigger problems. The lack of discipline and drunkenness dominated the deck from the moment the sailors began to store their given quantities so that they consume them all together. 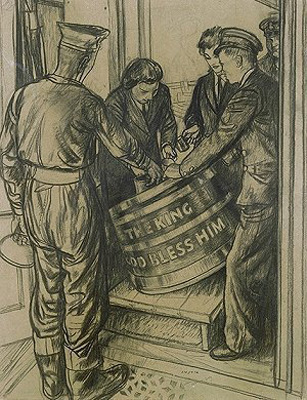 On the 21st of August of 1740 the admiral Edwards Vernon ordered the daily portion of rum to be diluted with water at a ratio of 4:1 (4 parts water, 1 part rum) and be given only twice a day to the sailors. That mixture became known as “Grog” and even with the addition of other ingredients such as lime, lemon, sugar and cinnamon the reaction of the fleets was contemptuous. However, the drunkenness problems continued having as a result the quantity reduced to a minimum of 1/8 gallon.At the beginning of 1970 the board of admirals expressed its concerns regarding the security of the sailors and argued that due to technologically advanced machinery and equipment, sailors should not consume rum in order to be safe and properly handle the equipment. The subject arrived at the House of Commons in 28th of January and it was debate that remained in the history as the “Great Rum Debate”. During this debate James Wellbeloved member of the Labour Party and former sailor of the Royal Navy was supporting that rum was helping the sailors to deal with the upcoming danger with greater power and determination. Nevertheless, he failed to persuade the Parliament.

So, in 31st of July of 1970 was announced the end of the Rum Ration. The sailors of the Royal Navy were boarded in the ships to hear for the last time the six bells that were calling them to get their 11 o’ clock portion. Many of them they were wearing black armband in a sign of mourning. Since then and until today the Black Tot Day is celebrated as an important moment in the history of the British Navy.

Negroni – Can it have a Greek character?