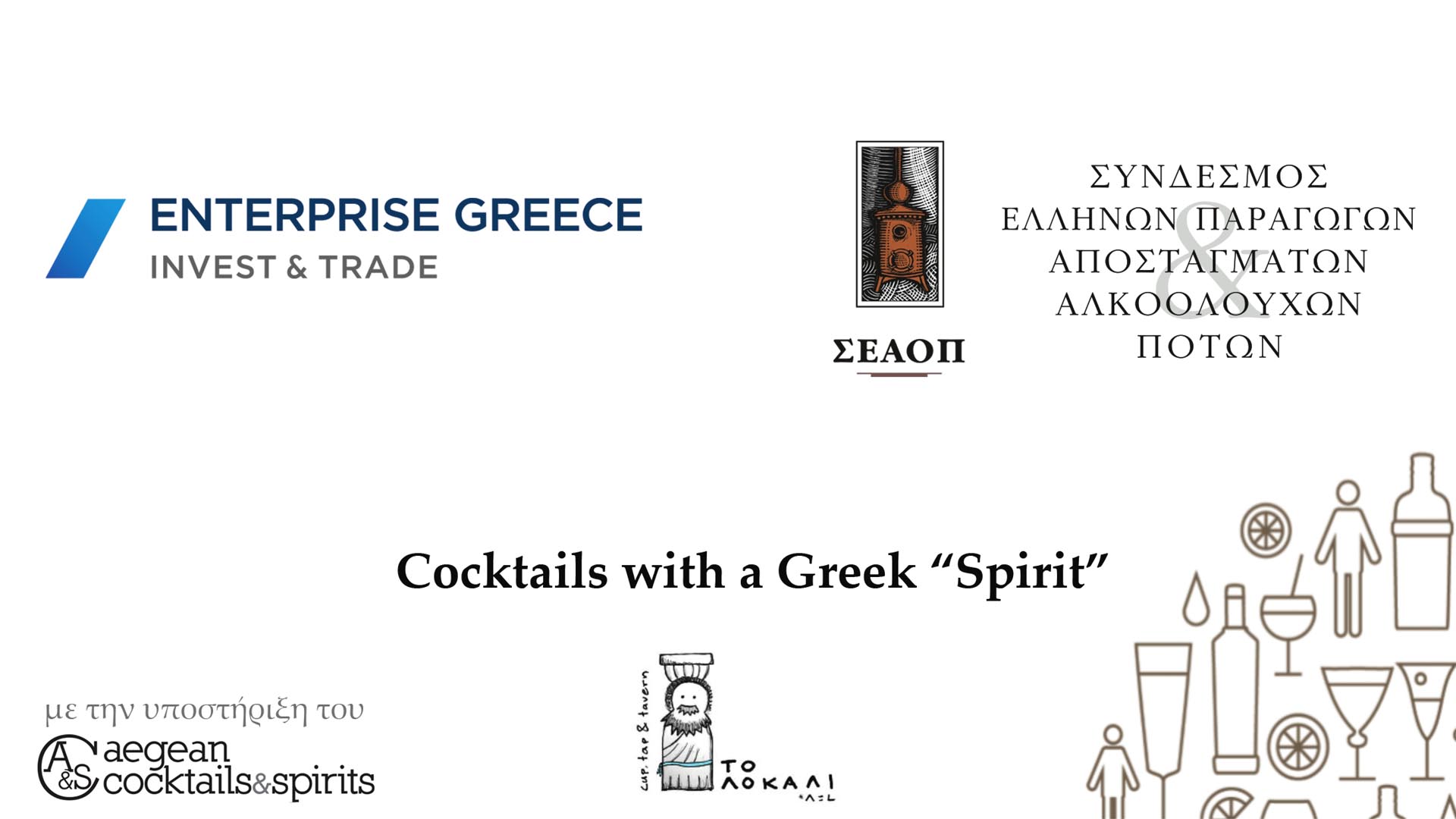 If I ask you what do you know about Greek spirits what would you tell me? I am sure that you will talk to me about summer ouzo drinks near the see in small tavernas. You will tell me about tsipouro and mezes, while you will not leave out the mastic liqueur. I believe that just a few of you, you will tell about a tasty cocktail that you’ve tasted recently in one of your nights out. If I also ask you about Greek gin or vermouth what will you answer to me?

If you are keeping up about the market news you will reply to me that of course, we have. They are so good that can easily get compared with the same international spirits. That is exactly what the representatives of S.E.A.O.P. and Enterprise Greece believe, who joint forces. Not against the evil bad like other Batman and Superman, but against the international spirits, aiming to prove that the Greek spirits are here and they deserve a place next to them in local and international bars. The organization Enterprise Greece is a national body, which operates under the supervision of the Ministry of Foreign Affairs and provides a full spectrum of services related to international business relationships and domestic business development for the international market and is co-operating with S.E.A.O.P. the Greek Federation of Spirits Producers. A cooperation of great importance as stated by the president of S.E.A.O.P, Nikos Kalogiannis “With this co-operation, we strengthen the Greek branding of our distillates and make them competitive against international brands.” From his side the president and Chief Executive Officer, Grigoris Stergioulis said: “The strategic planning of Enterprise Greece and SEAOP focuses on strengthening and developing the production and distribution of famous Greek beverages and spirits, implementing actions that enhance the extroversion of the industry, and builds the branding of Greek spirits.”

The spirits industry is a rapidly growing sector of the national production. In particular, in 2017 the production of clear alcohol in the country touched the 19,3hl. Important is also the fact that although the financial difficulties both with taxation (rise of Excise Duty four times and VAT three times during the crisis years) as well as the force of capital controls in 2015, the industry of alcoholic spirits contributed about € 1.5 billion to GDP in 2016. The exports in 2017 recorded an increase of 5.7%, corresponding to approximately €78.4 million with main countries of export, Germany, Iraq, Spain, Bulgaria and Holland. Taking into consideration those factors we believe that this effort, to promote the Greek spirits, from both organizations is more important and commendable. This is a primary production sector that we should all be proud of and we should be promoting more. As it was mentioned at the recent event the two organizations held, greek spirits with their own unique character can stand worthily in Greek and international bars.

With actions towards that direction, the Greek spirits will be present at international exhibitions like the biggest and very popular bar show of Europe, the Bar Convent Berlin, which will be held in October. Following in March 2020, the Greek spirits will be at the international exhibition ProWein. With their presence to those exhibitions, the two organizations are aiming to increase their export activity both in Germany and worldwide, as both exhibitions attracting professionals from around the world. Corresponding exhibitions in other major European countries will follow. Until today often we see at the bars, cocktails with mastic, while the equally traditional ouzo and tsipouro were following used especially like an aperitif or paired with mezes. With organized actions, the two organizations are aiming to change that status and introduce the bartenders to the logic to think “out of the box”. Make them really and dynamically creative with local products. Turn to the locality, something which successfully Denny Kallivoka has started by organizing the Aegean Cocktail & Spirits Festival. Actions are also made individually by companies such as Isidoros Arvanitis’s “Local Spirits Project” focused on its products. Greek spirits have also beeν in the spotlight ιn bars likes Senios and To Locali.

In conclusion, the strategic planning of the two agencies for extroversion includes the invitation to opinion leaders and bartenders in Greece. During their time in Greece, they will be able to visit distilleries learn about the production and bottling process. They will also conduct educational seminars in both in Greece and abroad for professionals in the field.