written by published: 4 years ago 420 views 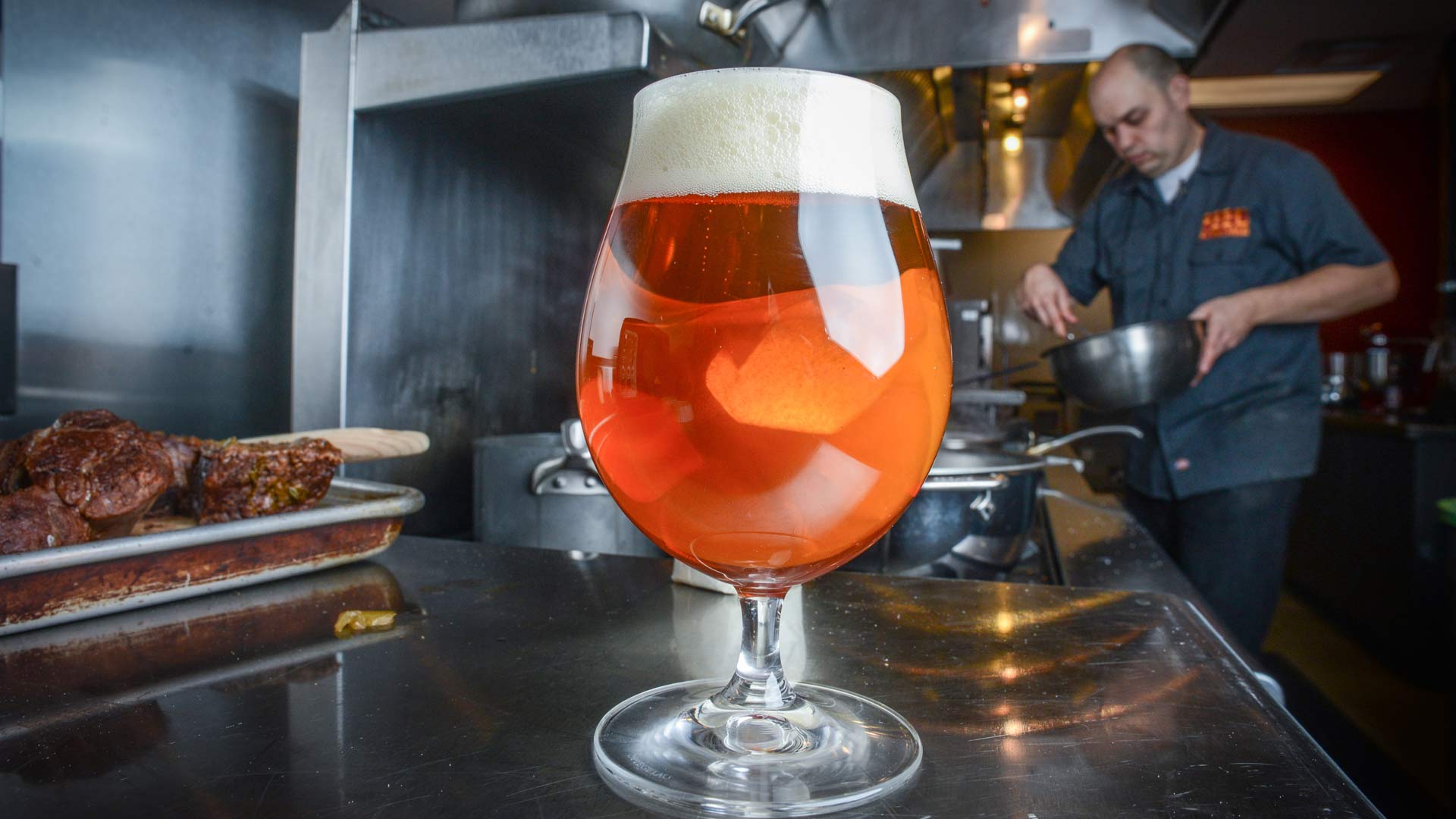 Adam Dulye, Executive Chef at the Brewers Association, is one of the world’s leading experts on beer and food pairing.  Here he looks at opportunities for Greek brewers, chefs and caterers to raise the pairing bar.

Pairing beer with food in the USA is arguably more advanced than anywhere else in the world. U.S. style pairings involve culinary skill and brewing expertise to elevate the beer and food experience to a whole new level

In America, beer and food matching is highly collaborative with small and independent brewers working together with like-minded, small and independent producers and suppliers in their  local communities.  The majority of on trade establishments, from basic diners through to white tablecloth restaurants, offer an extensive  beer list alongside menu suggestions and the vast diversity of different beer styles in the States lend themselves perfectly to food matching.

Chefs and pub operators need to think of beer as one of the flavour components of a dish, the only difference being it’s in a glass not on the plate. Hops can be very food friendly.  Intense hops can be calmed by the use of fat while beers that feature more balanced hops need little to no fat or heat to bring them to the attention of the palate.  Small and independent brewers and producers are now the cornerstone of the craft brewing and culinary movement. We’re looking to challenge the palates of people all over the world in a way they had never thought possible before and create excitement with beer and food.  Quality is huge right now – the quality of American craft beer and the quality of ingredients used by the chefs are changing people’s perception of beer and food.  Now is the time for Greek chefs and pub operators to broaden their horizons and create interest in beer and food.

According to a recent study by Nielsen on behalf of the Brewers Association, 88% of American craft beer drinkers enjoy beer with their meal at least sometimes and 59% say they would be somewhat or very likely to choose a specific beer style based on what they’re eating.  Nearly half of all U.S. craft beer drinkers say they drink craft beer more now than a couple of years ago. It is only a matter of time before these trends take hold in Greece.

When devising your own beer and food combinations consider the following:

There are three main interactions when planning your beer and food pairing – complementing, contrasting and cutting and you need to decide which one best suits the dish you are cooking.

For a dish to be complementary you’re looking for harmonious flavours between the ingredients and the craft beer to bring the dish together eg. roast duck breast  with a brown ale or Dubbel or the light acidity of a witbier with a salad and vinaigrette dressing.  Roasting or grilling will complement the malts used in the beer and bring out the Maillard reaction (a chemical reaction between between amino acids and reducing sugars that produce a searing flavour as found on the char of a roasted duck breast).

Contrasting is the most challenging interaction on the palate and works best when the dominant flavour of the dish contrasts against the main flavour profile of the beer eg. sweet v sour or bitter v sweet.  A classic example is the tropical flavour notes of an American IPA with an intensely, hot pepper spiced dish or curry.

Craft beer cuts through the fat of rich, succulent and creamy foods to cleanse the palate after every mouthful and leave it feeling refreshed, clean and ready for the next bite.   The bitter strength and astringency of hops lifts fat from the palate and a sweet finish cuts away acidic flavours, leaving a pleasant sensation in the mouth.  Sour and tart flavours can cut away sugary and fruity notes and the scrubbing effect of carbonation diffuses the richness of the food. Try marinated beetroot and goat’s cheese with a Kölsch or a rich chocolate cake and malted ice cream with a barrel aged sour ale or a velvety-smooth stout.

I also suggest the following: As a common rule of thumb is to match strength with strength.  Pair delicate dishes with lighter craft beers and strongly flavoured dishes with intense, more assertive beer styles.  If possible, craft beer should be served in custom-shaped glass appropriate to the beers to allow the optimum delivery of aroma on the nose and balance of flavour on the palate.

Bottled and canned craft beer are not always visible to the diner and they may not know they are available.   Ensure you describe your beer range on the menu and that your staff can talk knowledgeably about beer styles and flavour.

Chefs, caterers and pub operators are welcome to make use of the wealth of free resources, in a variety of  languages, available on www.brewersassociation.org including the newly updated and expanded Craftbeer.com Beer & Food Professional Course, downloadable free of charge

For advice and assistance regarding beer and food pairing the Brewers Association publishes  American Craft Beer and Food:  Perfect Companions – a handy 12 page booklet detailing the basics of beer and food pairings, including a chart with 28 different beer styles showing pairing guidelines for main dishes, cheese and dessert.  Click to download

The Brewers Association Guide to American Craft Beer – how to understand and appreciate great beer looking at ingredients, terminology, best approaches for presenting and enjoying craft beer and the many different styles of craft beer. Find it here

More information is available on www.craftbeer.com