This is a story of how human intervention all but destroyed Europe’s wine and brandy industry and provided a massive boost for the makers of whisky and other spirits. The problem was a creepy, crawly, bug imported from North America, sometime during the 19th century, which all but destroyed Europe’s vineyards, indeed France’s wine industry was left withering on the grapevine.

And it wasn’t just people and manufactured goods which passed from coast to coast. So did plants, animals and bugs. And with one of these fast sailing and frequent boats came a yellow bug, closely related to the aphid, which reduced some of the greatest vineyards in France and most of grape growing Europe to dust.
In the 1870’s, phylloxera, a devastating aphid like bug, introduced on vines imported from America to Europe, attacked the roots of vines and all but wiped out most of the continent’s vines. France became the unwanted home for the deadly creepy crawly known as Phylloxera vastatrix. It’s tiny, voracious beetle which feeds on the roots of vines, causing fungal infection, root deformation and eventually their death. 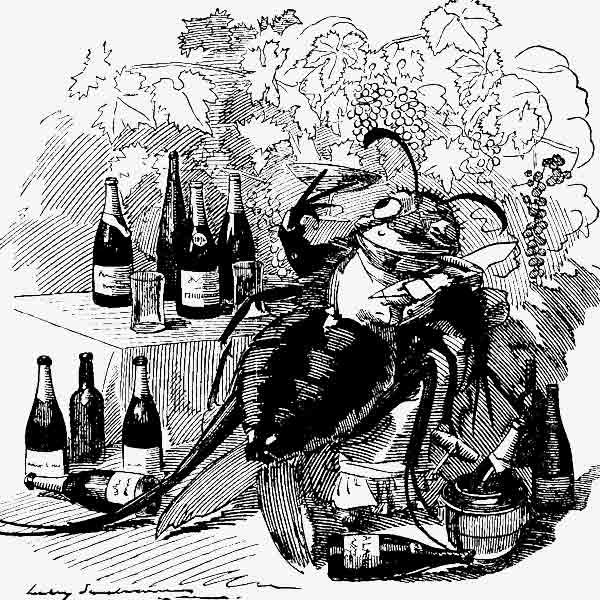 Not the first time

But phylloxera wasn’t the first unwanted grape disease to cross the Atlantic. Around the 1830’s a powdery mildew, called oidium, made the eastward crossing to Europe. Evidence of it was recorded by an English gardener known as Edward Tucker who noticed how a white, dusty fungus spread through his grapes and destroyed them. By the 1850’s the fungus had crossed the Channel and was spreading through French vineyards, where it was particularly partial to sauvignon and chardonnay grapes. Within a few short years the fatal fungus had spread to most vineyard in Europe. During this time, French wine production fell from 11 million hectolitres to 3 million hectolitres. Across Europe the fate of the wine industry hung in the balance.

Thankfully, by the 1850’s plant scientists discovered that by spraying vines with a sulphur compound the downy mildew could be, if not eradicated, held in check. However, by this time the loss of their crops had persuaded many wine growers to rip up their vines in order to plant supposedly Oidium‑resistant Vitis vinifera varieties, or hybrid varieties, which were imported from America. Little did they know that the supposed healthy vine stock harboured something an even more deadly enemy, phylloxera.

The beetle, which became known as the dreaded dry-leaf devastator, possibly arrived on vines imported by English plant hunters at some time in the 1850s, other say a Monsieur Borty imported American vine cuttings, and planted them in his Rhône vineyards in 1862.

The bug thrived in the soil in which most of Europe’s vines were planted, however in North America it co-existed more benignly with the vines it liked to live on. The bugs went on to gorge their way through Europe’s vineyards stating in Rhone and it ended the glory years of wine production. At the chomp of a bug’s jaws, vineyards across France were devastated and winemakers were struggling financially as vines languished and died in some of the greatest vineyards. Brandy production also plummeted as distillers need the alcohol from wine as the base alcohol for the spirit. 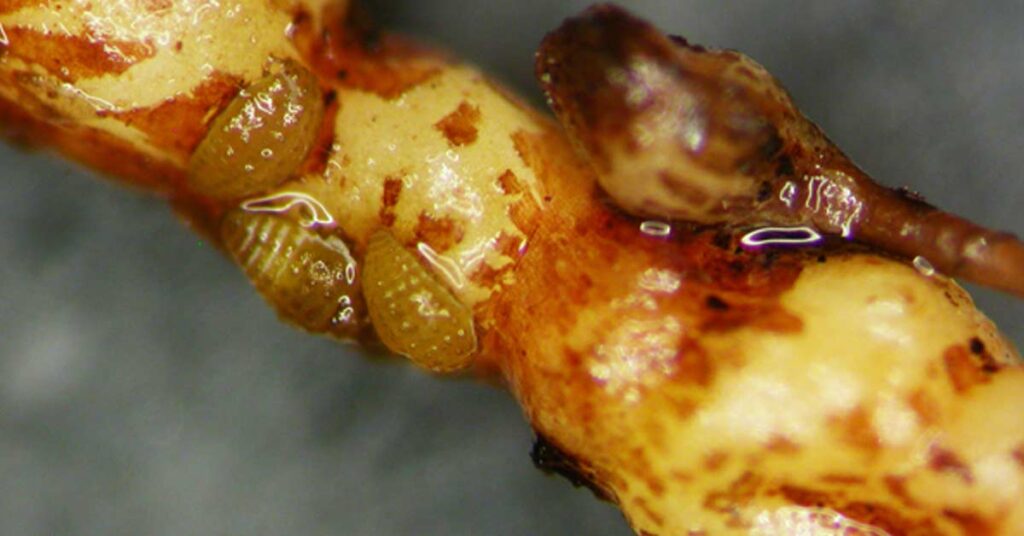 Some lose others win

But brandies loss became whiskies gain. The Scots were quick to take advantage, and by the time the French industry recovered, Scotch whisky had replaced brandy as the preferred spirit of choice. There are even records of port being fortified with whisky rather than brandy. During the 1870’s spirit merchants in the United Kingdom started blending whisky – mixing together spirit from the traditional pot still with grain whisky made in the new Coffey still. Indeed they probably had no qualms as to where the whisky came from or in what piece of equipment it was distilled in –spirit from Ireland and England would be added into the mix– though Scotch malt whiskies probably underpinned and provided the main characteristics of each blend.

And it was to whisky that drinkers turned when their beloved brandy was no longer on sale. The time for blended whisky had come – whisky and soda, not brandy, became the drink of choice for gentlemen. Blended whisky offered a drink of both sophistication and consistency. According to the Scotch Whisky Experience blended pot still whisky was inclined to be too strongly flavoured for everyday drinking, “especially by people in sedentary occupations and warm climates”. “By combining malt whisky with grain whisky, which has less pronounced characteristics, the demand for a whisky that is milder in flavour and more suited to the conditions of modern life can be met.”

The Scottish and whisky industry started to flourish, especially the blended sector, by the 1880 there were more than 130 working distilleries in the country, and this had grown to more than 160 by 1898. Ireland also experienced a dramatic increase in production of whiskey and sales to North Americas.

The first incident of phylloxera in Greece broke out in Pylaea, Thessaloniki, around 1898. Gradually, the blight of phylloxera spread through the vineyards of northern Greece which, together with the vineyards of Epirus to the southwest, was afflicted the most. Assyrtiko is one kind of grape known for growing on Santorini island of the Aegean Sea, a tourist destination nowadays. The volcanic ash is probably the cause of not catching phylloxera. Thankfully, phylloxera never made it to most of the Greek islands. Another Mediterranean island that never had an incident of phylloxera so its vines had been never grafted for, is Cyprus.

As phylloxera spear across Europe, hundreds of people were put out of work and land cultivated with vines for generations lay unused. All manner of chemical coshes were invoked to curb the advance of the bug. And if pesticides didn’t work toads, chickens and other animals were employed to see if they would eat the bugs. None of it worked, clearly root and branch reform was needed. But then some canny scientist heard on the grapevine the solution might lie back across the Atlantic where the bug was endemic. Vines were not being devastated by the underground bug.

Botanists put forward the idea of grafting, aphid-resistant American vine root stock with Europe’s fast declining grape stock. The big fear was that grapes from the grafted plant, would have the unwanted foxiness flavour, typically found in American grape varieties. Bouschet is credited with successfully achieving one of the first successful grafts in 1874.

The resultant grapes were a success. They had the taste profile of European varieties, the grafts seemed to last and they were resistant to the phylloxera. However, the damage to the brandy industry was done. Even more than a century later more whisky is drunk in France than brandy. 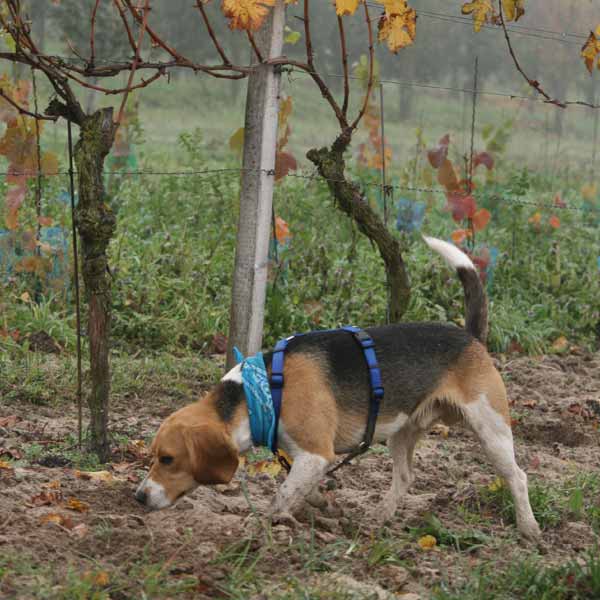 Dogs to sniff out vine killer

Few parts of the world managed to stay free of phylloxera as it cannot survive in very sandy soils. So the great plains of Hungary, Colares in Portugal were immune from attack. Chile protected by the Andes and Pacific Ocean has remained free of the bug.

However, a sniffing dog, could help ensure some of the world’s grape vines grow disease free. University of Melbourne viticulture and animal science researcher Sonja Needs has combined her two passions dogs and wine. She trained sniffer dogs to detect vineyards disease, especially phylloxera. South Australia is currently phylloxera free, and would like to keep it that way, as is a small area of the Yarra Valley. Needs says it is possible to train any breed to be a sniffer do and it was a case of taking a dog already trained in other services, like drug detection, and “flicking its switch” to instead detect vine pests such as phylloxera.

“Once the dogs are trained in detection, it’s a very simple thing to give them another scent and they just work” Needs said. “And they love it, it’s a fun activity for them and we love doing it because it’s fun for us too”. She was particularly interested in what stage the dogs could detect the life cycle of phylloxera. And when they sniff out the bugs the dogs start to energetically wag their tail, bark and whine. “Because phylloxera is on the roots inside the soil, I wanted to see if the dogs can pick them up at a metre below the surface”, she said. “And if they can, it’s going to be an amazingly powerful tool we can use as a detection tool”.

If the scientist is right then dogs could be used to patrol the edges of phylloxera free zones and sniff wine grape equipment before it is moved, making sure that the pest is not spread.

Tim Hampson is editor of "What's Brewing" newspaper and "BEER" magazine, contributing editor at "CAMRA's Good Beer Guide" and Past Chairman of the British Guild of Beer Writers (2006-2018). He is the author of many books including: "The Beer Book", "Haynes Beer Manual", "Haynes Whisky Manual". He is a regular contributor to The Telegraph, All About Beer, American Brewer, Big Farmer & Grower and OnTrade Preview. He broadcasts regularly on beer and food for the BBC. He was also a contributor The Oxford Companion to Beer and 1001 Beers You Must Try Before You Die.