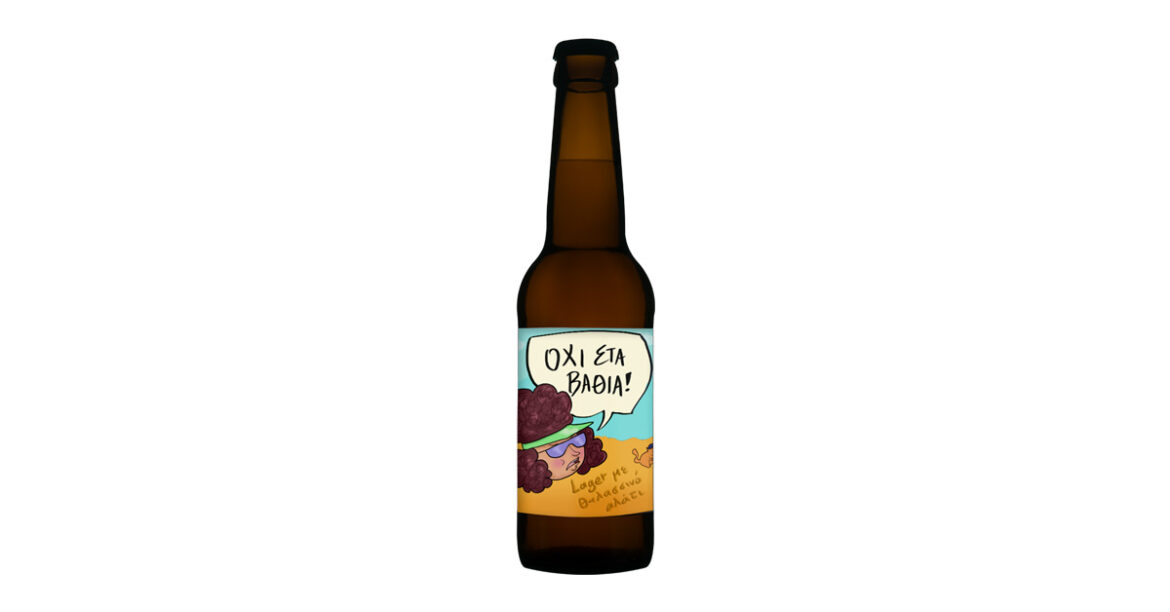 It was the summer of 2021 when in June we saw the publication for the second label of Kourafelkythra. ‘Oxi sta bathia” (read: Óchi sta vathiá, meaning: Not in the deep) expands the range of the nomadic brewery Midnight Circus Gypsy Brewing Company by adding an unusual ingredient for beer, salt. The new beer also has the characteristics of the comic on its label and refers, where else? To the summer.

Elements and details of the label from Kourafelkythra (read: kourafélkiethra, meaning: brand name/title of the comic) and summer, with the blue beach and the golden sand are embracing the bottle. The mother dominates the left side, as we look at the bottle/label and obviously shouts to her child the expression-title of beer, which most of us –in Greece– have certainly heard in our youth.

“Oxi sta bathia” is characterized as a Lager beer with salt flower from the salt flats of Kythira (or Cythera, Greek island) and is presented as a summer beer that can be accompanied by a slice of lemon. Whether for marketing or for any other reason, as lemon adds absolutely nothing to the flavor, I would suggest leaving the bottle and beer as they are.

The beer appears cloudy, dark blonde, with medium duration, white foam. Sediment is visible in the glass, however, the carbonation I expected to see in a Lager is not visible. On the nose initially sweet aromas of honey, flowers and lemon, with the hops making its presence slightly felt, however as it warms, yeast aromas emerge. In the mouth the carbonation is felt –maybe more than I would like– changing the feeling of it in every sip. Medium-bodied, with cereals predominating, caramel bitterness slightly changing the taste and salt making a purely guest appearance towards the end, close to the aftertaste. Slightly dry, easy to drink, summer beer. It could have a more intense sense of salt in the mouth –even in the nose– to stand out from any other Lager. A classic beer, which could be distinguished for its slightly more salty taste, as suggested by the label.

Produced in Chios by the Chios Microbrewery on behalf of the Midnight Circus Gypsy Company. Bottled in a 330ml bottle at 4.5% abv. Its cost ranges up to € 3.00, which I consider somewhat expensive.