written by published: 5 years ago 654 views 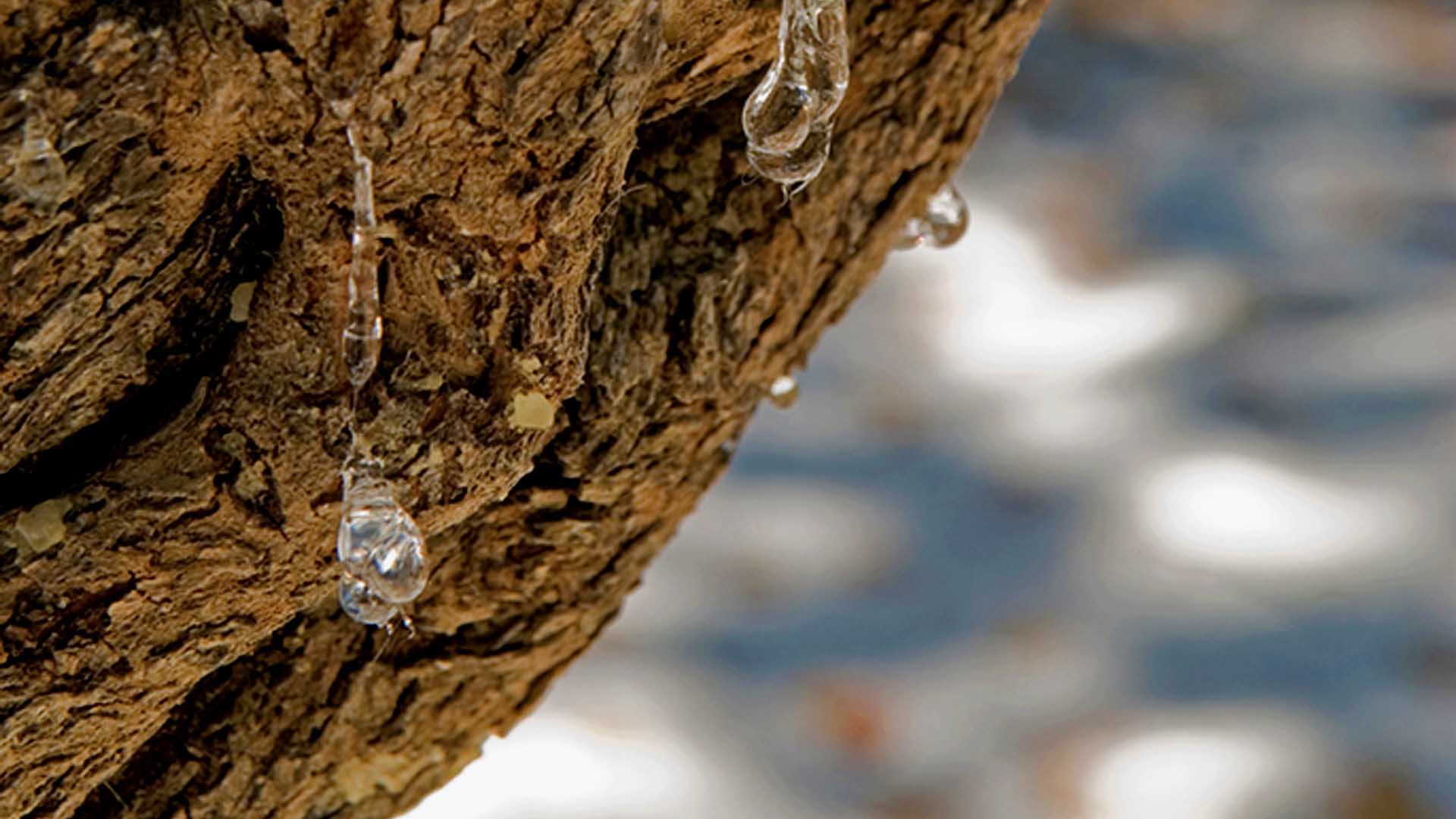 Every summer, people living in the Mastichohoria of Chios, known as mastihades, make slits on the trunks and branches of the mastic trees with a special iron tool. From these slits (wounds) the tree secretes an aromatic resin which is known as the tears of the mastic. It is a process that has been repeated for 2500 years in the southern villages of Chios.

Mastic is the resin of the schinos (it means shrub or bush in Greek), which belongs to the family of plants known as “Pistacia lentiscus”. Resins is what we call the hardened crystal-like sap that comes from the bark of various trees. The most common resins that we come across are myrrh and frankincense, which were given by the 3 Magi (Three Wise Men) along with gold, were traditional gifts to Kings and royalty, showing us their great value and importance. Since ancient times resins were well known and used systematically in the preparation of ointments and medicine, they were used in embalming and as disinfectants as well as incense. To Greeks, besides the resin of the mastic tree, another well-known resin is the resin from the pine tree.

While the mastic tree (schinos) can be found all across the Mediterranean, it’s only in southern Chios that they are systematically cultivated and produce mastic. This uniqueness is due to the microclimate of the area and the steady cultivation that has led to a new kind of more resistant and productive plant. The business ingenuity of the Chians, since antiquity, is responsible that mastic became associated with the island. The mastic of Chios is now identified as a Protected Designation of Origin product and its cultivation process, as well as the product itself, is an element of UNESCO’s Intangible Cultural Heritage of Humanity.

Since it was first mentioned, in the Orfics, in the 5th century BC, the mastic has travelled throughout the Mediterranean. It was the first chewing gum in ancient Greece. It has been a part of luxurious Roman festivities, in Arabic and Alexandrian doctors’ prescriptions and it has been found in Franciscan monasteries. It has been tried alongside hops and used in the drinks of British nobles. It’s been found in Christian and devout Muslim incense burners, in Andalusian cooks’ recipes and even in the harems of the Ottoman sultans. Mastic has been used as a stimulant as well as transformed into a sweet -Turkish delight- as well as in the teaspoons of Greek coffee shops served with ice cold water and today it can be found in bars all around the world.

One of the most interesting legends surrounding the mastic is that Christopher Columbus, knowing its value presented a mastic tree as a treasure, along with other rare spices and exotic fruit from Cuba, in order to be able to continue financing his journey. Genoese, in origin, Columbus, was well aware of the mastic tree and the production process as well as its commercial value. He had visited several times the island, which at the time was governed by Genoese. This manoeuvre was an attempt to benefit his up to that time, fruitless journey.

The daughter and Lady of Chios as the mastic is called by the locals has been officially found in the beverage industry since the beginning of the 18th century, while even earlier we find recipes where mastic oil is mixed with other balm or spices for therapeutic purposes.

However, the big difference in beverage making has been made by Skinos Mastiha which has elevated the mastic liqueur to a recognized Mediterranean ingredient and has placed mastic initially in the best bars of Europe and soon after around the world. Since 2010 with clever and persistent marketing and an excellent product, it has virtually opened the international market and has made mastic an identifiable brand. The next move comes from the privately owned Plomari Isidoros Arvanitis Distillery of Mytilene, where the first ever mastic extract, “M DRY MASTIHA” is distilled in copper stills using 100% mastic from Chios.  So now we are moving away from liqueurs and start the dry spirits category in Greece.

Mastiha much like vanilla has a rather bitter taste and a distinctive and intense aftertaste while it’s characteristic sweet and aromatic bouquet plays with our Greek childhood memories, reminding us of our favorite tsoureki (brioche type bread) and homemade “submarines” (mastic spoon sweet submerged in a glass of ice water)!